The equipment with which go is played is steeped in tradition. The size of the board, stones and bowls, and the materials used to make them have remained unchanged for centuries. Modern technology has had little effect on the traditional methods used to make high-quality go boards. The best boards are still handmade by master craftsmen who have inherited the art from their fathers. This family tradition can go back for many generations.

The go board is not exactly square: the standard dimensions are 45.4 centimeters in length by 42.4 centimeters in width. The result is that the stones slightly overlap in the horizontal direction, but the advantage is that the monotony of perfect squares is avoided. The players often add to the effect by placing their stones somewhat off center. During a game, the players sit facing the narrow ends.

A board’s thickness is a matter of taste, but traditional boards are usually between 15 centimeters and 19 centimeters thick. The standard height for the legs is 12.1 centimeters, so the height of both the board and legs will be at least 27.1 centimeters.

The finest go boards are made from the highly lustrous, close-grained wood of Japanese kaya (torrea nucifera) trees. This yellowish wood is ideal for go boards because its color harmonizes with the black and white stones, and because it produces a pleasing «live» click when a stone is resolutely played on the board. Kaya boards are resistant to decay and the color of the wood becomes deeper and richer with age.

The quality and the price of kaya boards are determined by a number of factors, the most important of which is the cut of the wood. There are different ways of sectioning kaya wood for go boards, each of which produces a distinctive combination of playing surface, end-grain and side-grain patterns. The most desirable boards have straight grains along the surface and the end-grain. This kind of cut is called tenchimasa. Tenchimasa boards are priced from 6 million yen to more than 20 million yen.

Masame boards are also highly prized. These boards have a curved grain at the narrow ends as shown in the illustration at right. This cut also produces a straight grain along the surface of the board. The prices for high quality masame boards start at about 2 million yen and can run to as high as 6 million yen.

One reason for the high cost of these boards is that a tree has to be old enough for the trunk to have grown sufficiently to make these desired cuts: tenchimasa or masame board can be cut only from kaya trees that are more than 700 years old. Only one or two tenchimasa boards and very few masame boards can be cut from one tree, so they are rare.

At the lower end of the kaya-board scale are the itame boards. If you look at the illustration, you can see that the surface grain is irregular. Aesthetically, this is not as desirable as a straight-grained surface, so their price is much lower, starting at from around 400,000 yen to about 1.5 million yen. Quite a few itame boards can be made from a single tree, hence the lower price.

Players who want to play on a beautiful kaya board in their homes, but cannot afford the high cost of a traditional kaya board with legs, will often settle for a five-centimeter table kaya board. These boards are usually made with two or three strips of wood, skillfully glued together. Care is taken to make sure that the different strips match, and a beautiful straight-grained surface is produced. Such boards, a specimen of which is shown in the picture at top right, cost about 80,000 yen.

Because kaya boards are so expensive, the most widely used wood for go boards is katsura (cercidiphyllum japonicum). Boards made from this wood are reasonably priced and are, therefore, the preferred type for use in go clubs. Recently, wood from trees native to North America and Indonesia have been used to make reasonably priced, good quality boards. Although it is not necessary to play on a wooden board, most go players find that one of the pleasures of the game is hearing the resonant click produced when a stone is played on the board.

Black stones are made from slate that is mined in Wakayama Prefecture. These are relatively inexpensive. It is the white stones that make up most of the cost of a set of quality stones. White go stones are traditionally made from clam shells that come from Hyuga, Miyazaki Prefecture. Just like kaya trees, Hyuga clam shells have become scarce and expensive. As a result, clam shells from Baja California in Mexico are now being used to make good quality shell stones at a fraction of the cost of a set from Hyuga. Since Mexican shell stones are still fairly expensive-depending on thickness, prices range from 16,000 yen to about 250,000 yen-most go clubs and many individual go players use stones made of chip-resistant glass.

As with the boards, the grain of the shell stones is aesthetically important. It should run straight across the surface of the stones-the straighter and more close-grained, the better.

Stones are kept in round wooden bowls with lids. The most expensive bowls are made of a beautiful mulberry wood, found only on Miyakejima island in Tokyo. A pair of such bowls can cost hundreds of thousands of yen. Most bowls, though, are made of more reasonably priced types of wood, such as keyaki, a beautiful yellow wood that perfectly matches the golden yellow of kaya. Chestnut and plastic bowls are widely used in clubs.

How go is played

Go is played by two persons on a board with a set of black and white discs called stones. A full set of stones consists of 181 black ones and 180 white ones. The full-sized board has 19 vertical lines and 19 horizontal lines. The number of stones corresponds to the number of intersections on a 19×19 board.

The object of go is to gain control of territory, so in many ways it resembles land warfare. There are border clashes and invasions; enemy forces can be surrounded and captured; groups of stones can be cut off, pursued and cornered; there are feints and probes. At the same time, go has an architectural quality. The player tries to build well-designed, efficient, strong positions, and good players tend to arrange their stones in visually appealing shapes. 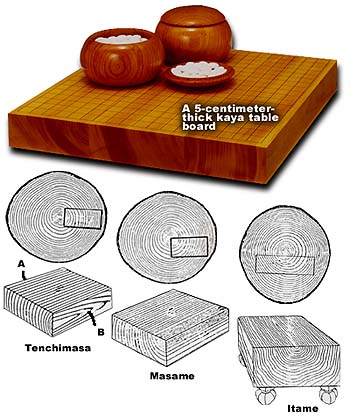 Although the 19×19 board is standard, beginners are encouraged to begin their study on a 9×9 board. This is the board size we will use to explain the rules.

Rule 1.The board is empty at the start of the game.
Rule 2. Black makes the first move, after which Black and White alternate.
Rule 3. A move consists of placing a stone of one’s own color on an empty intersection. Diagrams 1 and Diagram 2 show a typical opening on a 9×9 board. In Diagram 1, Black makes his first move at 1 in the upper right. White plays 2 in the lower left. In Diagram 2, Black plays 3 in the lower right, mapping out a sphere of influence on the right side. White plays 4 in the upper left, mapping out his own sphere of influence on the left side.

Once played, the stones will stay where they are until the end of the game, unless they are captured and taken off the board. (Capture will be explained in the next installment.) They cannot be moved to other points. Except for minor restrictions, to be explained later, you may play anywhere you want, even on the edge or on the

For a book on the rules, we recommend «Go: A Complete Introduction to the Game» by Cho Chikun. It may be purchased or ordered from any English-language bookstore.